BiRDS OF RELOCATiON by ERiC PETERS 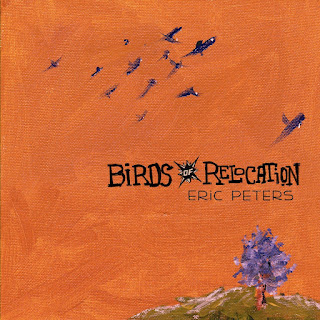 Today Eric Peters released his new album, BiRDS OF RELOCATiON. I was fortunate to get a pre-release copy, and it is already among my favorite albums this year.

Peters brings to his writing an honest, vulnerable faith, and turns his lyrics out with the hand of a craftsman. As I expected, there are songs I connect with. Songs I have played on repeat because they rehearse truth I dearly need, or put words to prayers I didn't know how to pray.

But albums that offer only a few meaningful songs make me wonder whether iTunes has it right - maybe I should buy my music piecemeal. BiRDS OF RELOCATiON keeps me coming back for the whole album, in order. And I think I know why.

I believe one of the things that separates a great album (or melody) from a good one is a sense of inevitability. Not predictability, but a feeling that, in retrospect, it couldn't have gone any other way, because only this way is perfect. Like the ending of Dr. Seuss's Horton Hatches the Egg

BiRDS OF RELOCATiON has many of these moments, and here are a few of my favorites:

When Peters starts waving goodbye, it is not at loss or grief he waves but at denial. What does denial have to do with lines like "There’s so much to be thankful for / And so much to be forgotten"? It's counterintuitive at first. But then one realizes that this is not the beginning of a rage, but of a healing - and healing must begin with honesty about our wounds.

2. The ending phrase for "Lost and Found"
This is a song about the source of joy, and Peters does a good job telling the story. Once he finishes his verses and does the chorus a few times, he could end with a nice shimmery chord. Instead, he breaks it down:

Instead of telling us we should celebrate, Peters keeps us here and insists we stomp along before we leave. Once we have, we realize that we needed it.

3. The electric guitar in "Don't Hold Your Breath" and "Where Would I Go"
Actually, this applies to the entire album. BiRDS OF RELOCATiON is officially the album where I fell in love with Andrew Osenga's playing. I can't imagine a "band" version of either of these songs without the electric guitar. The final riff before the bridge in "Where Would I Go" makes me laugh every time I hear it. Not because it's funny, but because it is. Spot. On.


4. The tension in "Voices" is not between voices and silence, but between accusation and truth.
That's about it. Maybe this one needs to be heard to be understood.


5. The melodies in "No Stone Unturned"
This is my favorite song on the album, and there is an awful lot right with it. Lyrically, it is the thoughtful, deeply-feeling bookend to "Lost and Found." But above all, I defy anyone to write better melodies for the message it carries.


6. The end of "Fighting for Life"
This is where the combined songwriting genius of Eric Peters and Andy Gullahorn reaches plasma-torch intensity. This is where the theme of new beginnings, of hopeful perseverance, and the avian imagery recombine in a climactic moment that defines everything previous:

So when the waters come
I fly above this flooded earth
looking for a sign of life
And relocate on
boughs of hope,