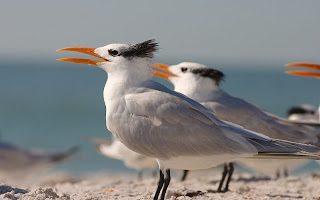 Off the coast of California is a small island, a few miles across, mostly rock and grassland.

This island was found to be a roosting place for an unusual variety of tern, and ornithologists considered it a place of pilgrimage.

But one year, they arrived to find that the grassland had been planted with grass of another variety - field after field of waist-high marijuana plants.

Upon returning to the continent they felt duty-bound to report this to the DEA, who sent a team to retrieve or destroy the illegal crop.

The DEA worked for two days, but it was tough going. Their orders were to be completely thorough, which was nearly impossible with the few tools and little time they had. Finally, the officer in charge made a decision: "Burn it!"

There was some argument, but eventually they set up corridors to protect what was left of the native grasses, and the stony beaches. Then they lit the marijuana fields, and they burned for three days.

In their efforts to be thorough, the DEA left no tern unstoned.