I, Robot: the movie 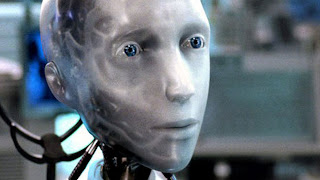 This isn't going to be a proper movie review. For one thing, I'm not qualified to write one.

movie is not my favorite movie, and certainly not the best I've ever seen. (Whereas Isaac Asimov is one of my favorite writers.)

But I like the movie, and I like it for reasons that more qualified reviewers seem to have missed - or even claim aren't there.

Take the movie summary from RottenTomatoes.com, for example:


Baring [sic] only the slightest resemblance to Isaac Asimov's short stories, I, Robot is a summer blockbuster that manages to make the audience think, if only for a little bit. ~ RottenTomatoes.com

I am baffled by the opinion (a popular one, it seems) that this movie bears "only the slightest resemblance to Isaac Asimov's short stories". I am even tempted toward ungracious commentary about whether people who write these reviews have actually read Isaac Asimov's I, Robot

stories. But I'll refrain. My purpose is to praise the screenwriting for getting so much Asimov into a science fiction story where his entire technological backdrop had to be thrown out.


Asimov wrote his science fiction before the invention of the integrated circuit. Nuclear physics was the dominant field of scientific advancement. Thus, his robots were given "positronic" brains - thinking machines somehow using the movement of positrons (as opposed to electrons).

Computers in the 1950s relied on vacuum tubes and valves, and Asimov's non-Robot stories often feature a city-subway-sized computer called "multi-vac". For all his great imagining, he never imagined the micro-processor, or how it would re-shape our lives in the span of a generation.

Replicating Asimov's imaginary future would have been too great a burden for a movie to carry, so the producers did not try. Instead they took our current technology as a starting place. Then they added Asimov's robots, and it turns out that the setting is not the story. (In fact, a change of setting can sometimes illuminate a story in fresh ways - which is why many movies of  Shakespeare's plays are set outside the Elizabethan era.)

The book I, Robot is a collection of nine short stories. Seven of them are puzzles - mysteries, if you will. And six of these mysteries turn on some interplay of Asimov's laws of robotics:

The movie I, Robot, is also a mystery that turns on an unexpected interpretation of the Three Laws. Not just a missing-robot mystery, but a murder mystery.


"Put a murder in, and have a detective solve it with a robot partner. If the detective doesn't solve it, the robot will replace him.""

But wait: That's not the movie summary. It's the way Asimov's editor pitched the idea of a Robot novel in 1952. Asimov wrote the book, entitled The Caves of Steel

, and two more after that - all of them murder mysteries featuring a detective who began by hating robots and ended by befriending them.

So the setting for the movie was changed,  I think for the better. The central conceit of Asimov's short stories was preserved, and even enhanced, because the film uses a twist on the Three Laws that was hinted at in "The Little Lost Robot" but never developed by Asimov. And the challenge of building a coherent movie from a short-story anthology was solved much as Asimov did himself. That leaves one great dissimilarity between the anthology and the movie: Will Smith.

Isaac Asimov was not an action-scene writer. But neither did he write convoluted, cerebral mysteries that are solved entirely from an armchair. The hero of his Robot novels is almost killed several times, and scared nearly to death several more. But let's be honest: Near-death by poisoned blow-gun dart and the terrors of agoraphobia would not play well on the big screen. Certainly not as climactic scenes. So I forgive the movie its explosions. It's a movie, after all.

To assess the appropriateness of Will Smith's banter, try this test: Of the following quotes, try to guess which one came not from the movie, but from Asimov's stories:


"Shut up! I know you know it, but I'm just describing the hell of it."
"Just you think first, and don't bother to speak afterward, either."
"So help me, another fool remark out of you, and I'll take away your rattle and teething ring."
"You are the dumbest smart person I have ever met in my life!"

Sorry, trick question. Only the last one was from the movie. The others are by Mike Donovan and Gregory Powell, the brilliant and sarcastic duo who often star in the I, Robot stories.

This movie has its faults - some gratuitous cursing among them. But I think it should be absolved of abusing Asimov's vision.