The Parable of Joy by Michael Card 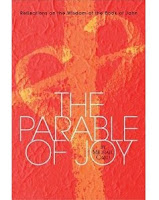 It seems strange to have to say this, but lately I have been returning to the idea that the center of Christianity is in Jesus Christ. (Col. 2:6-12)

See? I even feel the need to footnote what should be an obvious statement.

But the simplicity of this truth has saved me from despair as I find my decks awash with more good teaching than I'll ever be able to absorb, and more doctrinal controversy than I could sort out in several lifetimes. I think I relate to these men:


Now there were some Greeks among those who went up to worship at the festival. They came to Philip, who was from Bethsaida in Galilee, with a request. “Sir,” they said, “we would like to see Jesus.” (John 12:20-21)

At the time, it probably didn't sound like a grand ambition. But I believe that even a glimpse could re-make a man.

, is a commentary on the gospel of John.

This isn't my first book about Jesus' life. I've read some good ones. But still I bought this book wanting to see Jesus. And in its pages, I did.

Card disclaims this book as a scholarly work, though it is informed by what seems to be sincere and rigorous study. Instead, he tries to put us in John's shoes, watching and listening to Jesus, or at John's feet, listening to memories and explanations that only Jesus's closest friend, with the benefit of hindsight, can offer.

To do this, each chapter starts with a passage from John's gospel, and is followed by Card's commentary. Sometimes this commentary is largely instructional, other times he re-tells the story from the viewpoint of a by-stander or other unexpected narrator. I was surprised at how effective this was in helping me grasp both new details and overarching themes.

If you, like me, have thought that Jesus's teaching in parables meant He was perpetually coy about Who He Was, you will be as startled as I was to learn that to His Jewish audience, every claim He made -


"I am the living water"

- "I am the bread that came down from heaven"


...would have been a clear announcement that He was God, come unto His own.

The picture that emerges is not of an enigmatic Jesus, throwing sand in the eyes of the crowd and calling only a chosen few, but of a Messiah who plead over and over for His people to listen and believe. Their unbelief was not because they had not heard the truth, but because they were not given ears to hear or hearts to believe.

The story of Jesus has always played out in my head against a blank white backdrop, and the glaring contrast has forced me to squint, making the person of God-made-man difficult to see. Thanks to Card's writing I now feel like I have experienced the dust, the sweat, the fraying tempers, the quiet devotion and the laughter that surrounded Jesus.

Never before has Jesus been as tangible to me as this book has made Him. I can't say enough good things about it, although goodness and my friends know I've tried.
reviews