The Shade Path at Gilmore Gardens 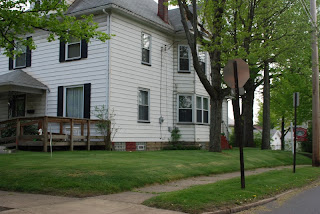 This article could also have been titled "What to do with that grass alley between the house and the sidewalk?"

The good:
Two mature maple trees on that side of the house, and a slope down to the sidewalk, so the house wasn't quite naked, and passers-by weren't actually in the lawn.

The challenging:
Two mature trees planted close to a house makes for a very dry, shady spot. Finding plants that  thrive under those conditions is tough. Also, despite the slope, the sidewalk and street are quite close.

Fencing in the entire property would have cost too much and been not quite the feel that we wanted, so we settled on making a garden path. At one end would be a garden gate into the fenced-in backyard. The other end would open up next to a weeping cherry tree featured in the front yard.

Planting the full length of the path would make a feeling of gentle movement, shepherding one's attention forward, to the next flower, rather than sideways to the street or house. At least, that was the idea. 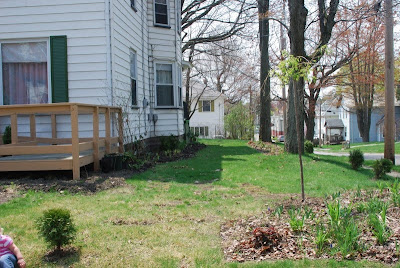 Our first step was to plant a semi-formal-looking row of "ball" arborvitae just outside the trees.

In retrospect, these might not have been the best choice, since they resent being clipped too closely, but we knew that they would grow much more quickly than boxwood.

We supplemented these with tiny rhododendron shrubs, which like shade and will look magnificent if they survive to their 10-feet by 10-feet + mature size. (But, the rhodies are struggling with the lack of moisture and we may eventually have to replace them.) The row of shrubs helped to establish a visual line - a symbolic break between public and private space.

So far so good.

We made the path by cutting in long beds on either side of the yard. We allowed the grassy walk to taper, being most narrow by the gate. This helps to force perspective and make the walk look longer and more dramatic than it really is, again pulling the eye along, away from the house and street. 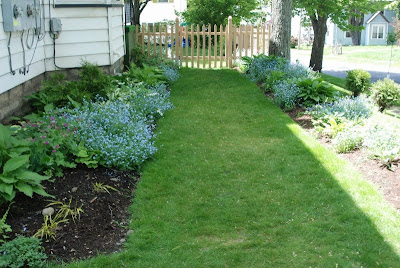 Our gardening budget was small, but some of our friends had big old hostas, which like shade, tolerate dry conditions and need to be divided every so often to retain their vigor. So we did some friendly bartering:

Our friends got some garden maintenance, and we got divisions from their hostas.

Besides a white variegated hosta that is very common here in town (it's old, so we're not sure exactly what it is) we gained starters for a couple of fun newer variates too, like Northern Exposure. We also got a few stalks of yellow-creme perennial foxgloves.

Then we splurged $20 or so on some tiny blue-leaved hosta seedlings,  a white Bleeding-Heart, a big stack of Forget-Me-Not seed packets, and one of columbine seeds. It doesn't sound like much in the re-telling and, truth be told, things took a while to get going. But we were delighted with the results the following spring. 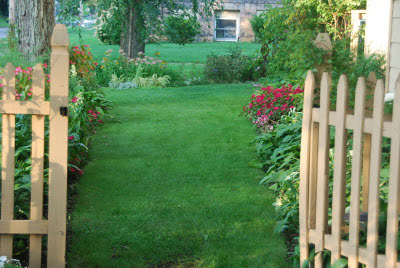 Everything has filled in nicely since then, and we've tried a bunch of other perennials (shade-loving Geraniums and Lenten Roses, for instance), and added a few annuals (mostly Impatiens) and biannuals (Foxgloves) for extra color.

The extra challenge of gardening in the shade has made this one of our favorite and most rewarding gardens.

We love to be in it, whether walking or weeding.


Just recently we added a few solar-powered lights along the path, and now we spend time strolling back and forth after dark too. 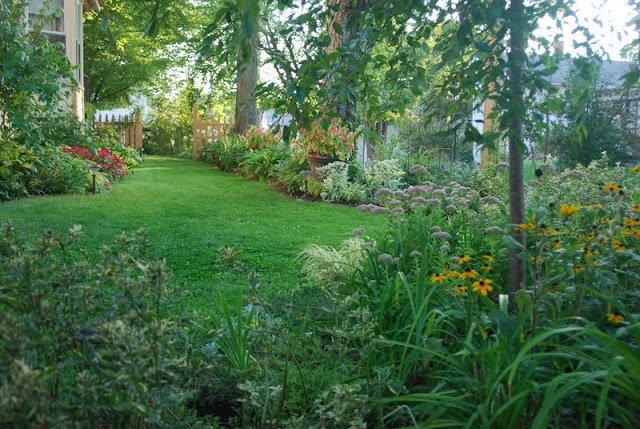